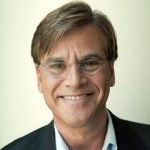 Aaron Sorkin is an Academy and Emmy award winning American screenwriter, producer, and playwright, whose works include A Few Good Men, The American President, The West Wing, Sports Night, Studio 60 on the Sunset Strip, Charlie Wilson's War, The Social Network, Moneyball and The Newsroom. After graduating from Syracuse University with a Bachelor of Fine Arts degree in Musical Theatre in 1983, Sorkin spent much of the 1980s in New York as a struggling, sporadically employed actor. Castle Rock Entertainment hired Sorkin to adapt A Few Good Men for the big screen. The film, directed by Rob Reiner, became a box office success. Sorkin spent the early 1990s writing two other screenplays at Castle Rock, Malice and The American President. After more than a decade away from the theatre, Sorkin returned to adapt for the stage his screenplay The Farnsworth Invention, which started a workshop run at La Jolla Playhouse in February 2007 and which opened on Broadway in December 2007.