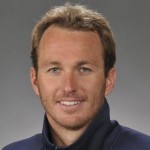 Aaron Wells Peirsol is an American former competition swimmer who specialized in the backstroke. He is a three-time Olympian and seven time Olympic medalist. As a member of the U.S. national team, he holds the world record in the men's 4×100-meter medley relay (long course). Individually, he currently holds the world record in the 100-meter and 200-meter backstroke events. In February 2011, Peirsol announced his retirement, saying, Peirsol's success have earned him the American Swimmer of the Year Award once. He has won a total of thirty-six medals in major international competition, twenty-nine gold, six silver, and one bronze spanning the Olympics, the World, Pan American, and the Pan Pacific Championships. In his Olympic debut at the 2000 Summer Olympics, at the age of 17, Peirsol won a silver medal in the 200-meter backstroke. Four years later, at the 2004 Summer Olympics, Peirsol won gold in the 100-meter and 200-meter backstroke and the 4×100-meter medley relay. He came short of his success he had in Athens by winning silver in the 200-meter backstroke, finishing behind Ryan Lochte.