Showing all quotes
A. J. Pierzynski (86) 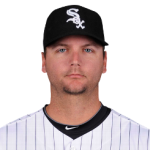 Anthony John Pierzynski was born on December 30, 1976, in Bridgehampton, New York. He attended Dr. Phillips High School in Orlando, Florida, where he won All State honors in baseball. Cleveland Indians outfielder/designated hitter Johnny Damon was one of Pierzynski's high school teammates. Pierzynski was involved in a controversial play that occurred on October 12, 2005 in Game 2 of the 2005 American League Championship Series versus the Los Angeles Angels of Anaheim. With the score tied and two out in the bottom of the ninth, with two strikes, Pierzynski swung at a low pitch from Angels pitcher Kelvim Escobar and missed, for strike three. Josh Paul, the Angels catcher, rolled the ball to the mound and left the infield. Pierzynski realized strike three had been called, but he had not been called out and ran to first base in case the umpire had ruled that the Angels catcher had not legally caught the strike three pitch. Home plate umpire Doug Eddings indeed ruled that the ball hit the ground and then went into the catcher's glove, meaning Pierzynski was safe at first. A pinch runner, Pablo Ozuna, replaced Pierzynski and stole second base. Third baseman Joe Crede hit a double three pitches later, scoring Ozuna for the winning run. A.J. was hired by Fox to be an analyst for the 2011 MLB postseason on the pre-game and postgame show. He again joined Fox for the 2012 Postseason.